I like to say unpopular things. Usually, I try to make them true, and I do my best to support my opinions/statements with proof (evidence-based approach). Why do I do this? I guess it’s because I’m a contrarian at heart; going against the crowd has, as a general rule, been a positive for my trading. So here we go.

You’re a small time nobody, and banks don’t care about you.

Banks are a big part of the Forex market. Huge. The Bank of International Settlements (BIS) collect, collate, and produce data on all the financial markets.

Their data suggests that banks comprise about 40% of the Forex market.

That’s quite a bit. It’s not all, but it’s a lot. The rest of the market is mostly commercial interests: Wal-Mart in America buying plastic shovels made in China, or a grocery store in Peru buying Coca-Cola from Coca-Cola Hellenic in Greece.

These everyday activities require spot transactions on the Forex market. So there’s that. The point is this: there’s a very large, robust, and very diverse group of people, groups, and companies that all combine to make up what is ‘the Forex market’… and then, there’s us. The retail traders. 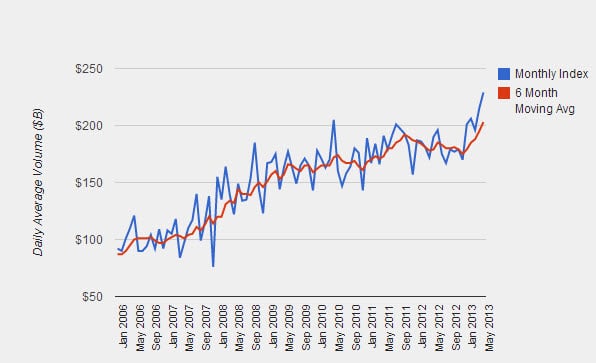 You can see in the graph above that retail traders are approaching the 200 B trading volume average, that’s nothing compared to the 4 trillion dollar trading average per day of the overall Forex market.

Retail traders, contrary to popular belief, are NOT a big part of the market. When I say we are the ‘little guys’, you can’t imagine what a breathy understatement that is. One of the best guesses at retail volume is reported by LeapRate included in the graph below. 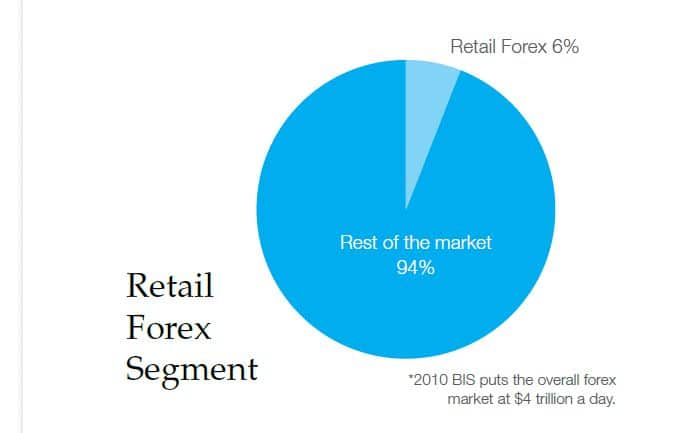 Closest estimate of retail volume puts us at a whopping 6% of total forex market volume by turnover. That’s right. 6%; All-in. Which brings me to my entire point: We really, truly are too small to worry about. Why? How much money do you think it takes to move the market? However much it takes to gas out whatever orders may exist currently and down the pipeline in a 4 trillion dollar market. LeapRate’s estimate puts daily retail turnover at 229 billion dollars. Which doesn’t sound like a small chunk of change, until you remember the 4 trillion figure.

If every single retail trader was in the market in one direction at the same time, the ‘big guys’ COULD, in theory, edge you out of the market…. But it would cost them more than the total value they would gain from the activity. In a 4 trillion market, 229 billion comes and goes really fast. So do yourself a huge favour: try not to let things like that cloud your thinking. It’s destructive to your psyche and your trading performance.

You’re really too small to worry about, but that’s a good thing.

There’s a lot of money and a lot of different players in the market; and they’re basically all trying to take each other’s money(excluding Wal-Mart and their plastic shovels).

Being one of the 6% is a kind of bonus; we get to be the proverbial fly-on-the-wall. Institutional traders HAVE to trade. It’s their job. Regardless of what’s going down in the markets, they’re being paid to be an active interest in it. We are fortunate in that we can pick and choose when we put our chips on the table. So try to spend less time worrying about “big guys”, and focusing on successful trading.

If the market turns against you, you can’t know if some big group of institutional short-term spec moved in on an S/R break, or if Wal-Mart bought extra shovels, or if sentiment simply turned, either at random or because of some random bit of economic data or news report. So do yourself and your trading a favour: stop worrying about ‘big banks’, because…

Creating enemies is bad for you.

Fear is a funny thing. It’s not good for much, but everybody feels its effects. As traders, we have a lot to worry about: stop losses, profit targets, sloppy entries, margin requirements, leverage, market volatility…. The list goes on and on.

You don’t need to add invisible enemies to the list. All you’re doing is creating an elusive foe with no definable parameters; something you can’t quite put your finger on, but is always there. Avoiding fear is paramount; it is crucial to a trader’s psyche (and his/her account balance). 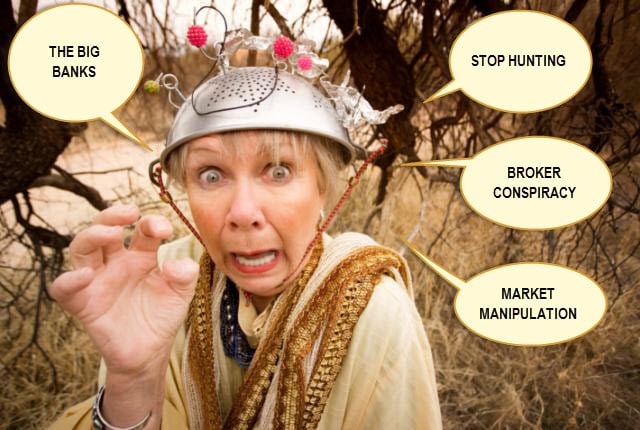 You don’t know who or what is moving into and out of the market from one day to the next; that’s the very nature of Forex. It’s a big, giant machine with too many parts to easily keep track of. So the next time you see price wiggle a bit, just try to remember it’s in the market’s nature to move; avoid jumping at shadows, and just let your trading speak for itself.

One of the (many) reasons this whole crazy Price Action project, was because we are purists at heart; letting the charts speak for themselves. You trade the price action signals the market gives you, and you let the other losers worry about themselves and their imaginary foes. So try to remember that the next time you get all concerned about market movements: we’re here for what we can see, and what we can interpret for a profit. Most of us struggle enough just with that.

Until next time, keep it easy, fun, and just a little on the inebriated side.